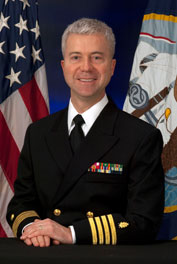 Dr. Kenneth D. LaPolla has been setting the highest standards of excellence in dentistry for over 30 years. He earned his undergraduate degree, a Bachelor of Science degree in Zoology, from Miami University in Oxford, Ohio, and his Doctorate of Dental Surgery degree from The Ohio State University College of Dentistry. An esteemed member of the dental community, Dr. LaPolla is a Captain in the Navy Reserve Dental Corps and an active member in many leading dental organizations, including the American Dental Association, Ohio Dental Association and the Corydon Palmer Dental Society.

Born in New York at Saint Albans Naval Hospital, Captain LaPolla was raised in Warren, Ohio. He graduated from Miami University in Oxford, Ohio in 1987 earning a BS degree in Zoology. From there he went to The Ohio State University College of Dentistry where he earned his DDS degree in 1991.

Captain LaPolla was released from active duty in 1994 where he entered private practice in Warren, Ohio. He began his first assignment with the United States Navy Reserves in 1996 at Naval Reserve Center, Cleveland, Ohio, later serving as the Executive Officer of NDC Great Lakes 305 Detachment G from 1998 until 2003. From October 2003 until December 2006, Captain LaPolla was appointed as the Special Assistant to M3D2R and Dental Officer for NR BUMED at the Bureau of Medicine, Washington D.C. After his tour at BUMED, Captain LaPolla served as the the Senior Dental Executive of NR OHSU National Naval Medical Center, Bethesda, MD from January 2007 until November 2008, and then as the Executive Office for Naval Reserve Operational Health Support Unit Pensacola, Florida from December 2008 to November 2010. Captain has served as the Commanding Officer for both NR VTU 0518G from December 2010 until November 2011 and the Operational Health Support Unit, Jacksonville, Florida, with 18 detachments and 701 personnel in Florida, Georgia, South Carolina and the Caribbean (December 2011 until November 2013). He was then assigned to Expeditionary Medical Facility Great Lakes, Detachment X-ray from December 2014 until November 2016. Captain LaPolla retired from the Navy Reserves after serving as the Senior Dental Executive for Navy Central Command Medical/5th Fleet responsible for direct dental support to Bahrain and the Middle East.

Captain LaPolla served honorably for over 29 years with both the active duty and reserve components of the United States Navy. He was assigned to duties and missions in 4 continents and was previleged to support all branches of the military over the span of his military career.